Iron Maiden uncut picture disc  of  The Trooper Promo version is an extremely rare release on vinyl.  The Trooper, appeared on the album “Piece Of Mind“. The album released in May of 1983. The shaped disc, was released in June of 1983 (EMIP 5397).

These promo uncut picture discs were available in very few copies (15-20) and their collectible value is very high these days.

Featuring probably one of the most popular Eddie images created by Derek Riggs, with Eddie wearing an English cavalryman uniform, based on the song lyrics which are about the famous ill-fated charge of the light brigade during the Crimean War in 1854

The shaped disc was pressed in the United Kingdom  as a limited release. The “Uncut” version  a must have for any iron maiden fan and collector.

Iron Maiden uncut picture disc  of The Trooper is rare. You hardly ever see this appear for sale, and when it does, it will go for around $2,500 to $3,500 every time. 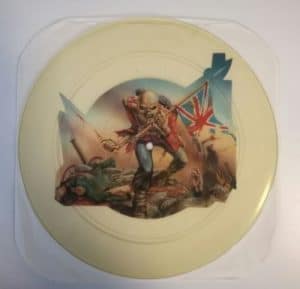 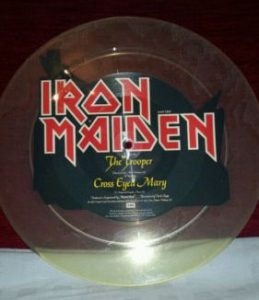 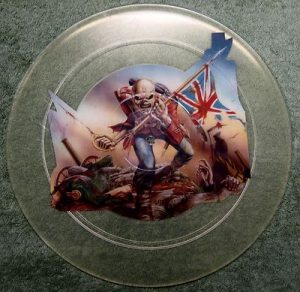 17 of the most Valuable Metal Vinyl Records