The Swedish “Ghost” is the new super group of the 2010s. People’s views about them and their music are divided. You can either love them or hate them, but you surely cannot ignore them. In their course so far apart from some exceptional music, they also have some rare records. Their first single is one of them.

It became expensive lately and if you find one, you can expect to pay between $800 and $1200 for it easily 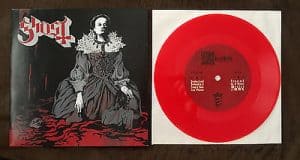 Sex Pistols God Save the queen vinyl 7″ is hands down one of the rarest vinyl records in the world. 25,000 copies of the Sex Pistols’ single were pressed ready for distribution before the label’s owner Herb Alpert reportedly tore up the contract just six days in. After the band announced their new label and upcoming single “God Save the Queen,” they reportedly returned to the A&M offices, totally obliterated, and proceeded to wreak havoc. Sid Vicious, new to the band at the time, is said to have destroyed a toilet bowl and dragged his bloodied foot across the office while John Lyndon allegedly mouthed off to A&M office staff. Lyndon then allegedly followed his outburst with another diatribe a few days later that included a death threat to a good friend of A&M’s English director. A&M had decided that they had seen enough and cut ties with the band, breaching their contract and destroying the majority of the 25,000 7″s of “God Save the Queen.”

The company’s managers destroyed the entire production except for a small part of it. It’s well documented that the directors of the company held back in a box (see the photo below) 20 or 25 according to other sources copies as “golden handshakes” for leaving high ranking employees of A&M when the company closed down in 1998. They were destined to be promo copies as somebody has written ‘promos’ adjacent to the red catalog stamper mark.

The majority of these rare records were put up for sale between 2000 and 2010 at very high prices as you can see below.

The 7″ single was re-issued in its original form as part of the limited edition 2007 vinyl re-issue series. 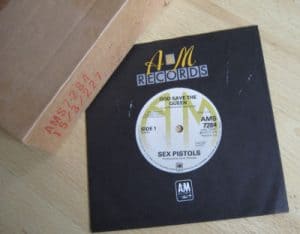 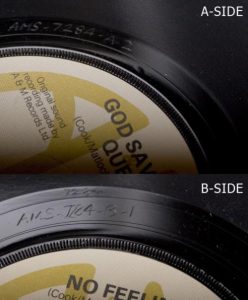 A God Save The Queen
B No Feeling