Scorpions Lonesome Crow OBI is a collectible and very hard to find Vinyl record.  For many people Lonesome Crow is by far the group’s most interesting work. Dark choir and inhabited singing, psychedelic jam, sound explorations, guitars and rhythmic hell, nothing is missing. Scorpions debut album is different from their later sound.  They play progressive hard rock with great guitars from the Michael and Rudolf Schenker . Klaus  sings more raw and dark.

Lonesome Crow is a mix of hard rocking Krautrock with some progressive rock elements. The Lonesome Crow album also includes some psychedelic influences. Dieter Moebius  is the engineer and Conny Plank is the producer and this is the explanation of the albums sound.  Very underrated and mostly unknown

“Promotional copy” in Japanese text is printed on the center label.

B1 Inheritance
B2 Action
B3 Lonesome Crow 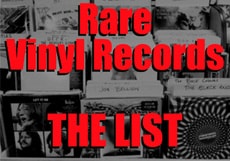