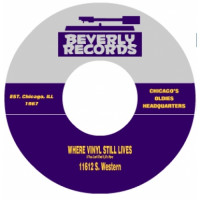 In the early years, Christine Dreznes, "didn't know the Monkees
from the Beatles," as she puts it. --But she helped expand the record
business into 4 stores in the 70's and 80s...which have since been
consolidated into a single location on S.Western Avenue. Though she's
passed on, her sons, Jack and Randy, along with grandson
Johnny, carry on the bulk of the Beverly Records family tradition