Fantastic Dee-Jays was a  garage band from Pittsburgh  featured two guitarists and a drummer, a lineup without bass player, which is very rare in rock music.

Their single ‘Love is Tuff’, was a typical British Invasion homage of the period, though unusual for Pittsburgh (where the British sound never really caught on). The high point for Fantastic Dee-Jays was opening for a Rolling Stones concert in 1965.

They recorded five singles and an album on local labels in 1965 and 1966 that are well respected by ’60s collectors. 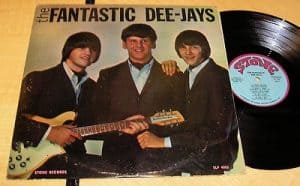 This vinyl Record was a ‘collectable’ already back in the 1970s, and hasn’t gotten easier to find since. Savage fuzz garage punk mixed with dark moody ballads & high energy mop top teenbeat rockers, all with that very special ‘66 sound.  The bright & beautiful front cover, mysterious back cover without even song titles, and the great colorful label design totally seal the deal. A total classic!!

Fantastic Dee-Jays – “self titled” Vinyl LP is a very rare and great garage album for many collectors across the globe. Not many of these vinyl records were pressed, maybe a few hundred. The track, “Fight Fire“ is awesome, and its worth having just for that.

Depending on the condition this record is in, you should expect to spend between $1200 and $1700. 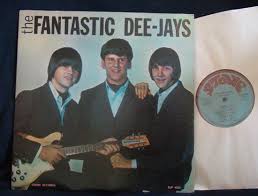 Track listing
A1 Fight Fire
A2 Get Away Girl
A3 Shy Girl
A4 Mr. Sad
A5 Two Tymes Two
A6 Apache